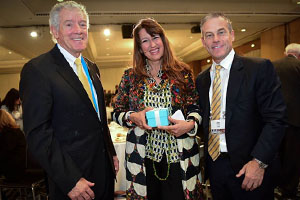 According to American educator Mark Prensky, today’s students are different from prior generations having grown up using technology. In turn, they’re programmed to think differently. Today’s higher education professors can... Read More
8:45 am - 10:00 am

Internationalization through Technology: The Glenville State College and University of Oviedo Collaboration

Collaboration between Glenville State College in West Virginia and Spain’s University of Oviedo demonstrates that using technology to connect students in two countries can be an effective, affordable, and scalable... Read More
8:45 am - 10:00 am

Many university faculty are now embedding into existing courses an effective teaching strategy called Collaborative Online International Learning (COIL) to provide all students with direct experiences in problem-solving on global... Read More
8:45 am - 10:00 am

Global Learning and Binational Collaborative Models for the Knowledge Economy

This session looks at how transformations in global markets and new technologies are giving birth to binational learning models, and specifically, the collaboration of U.S. and Mexican institutions in creating... Read More
10:00 am - 10:45 am

Public policy development in the United States remains unpredictable and very challenging, especially for the international exchange community. Forces within the Administration continue to pursue an aggressive overhaul of immigration... Read More
10:45 am - 12:00 pm

The future is accessible! That is the expectation as more people with disabilities – the world’s largest minority community – continue to enter mainstream spaces, assume leadership positions, and identify... Read More
10:45 am - 12:00 pm

An increase in global incidents has led to duty of care becoming a top priority for universities with students traveling abroad. Recent legal cases involving student safety, such as the... Read More
10:45 am - 12:00 pm

Why does the rhetoric in education abroad increasingly vilify popular destinations and the students who choose them? Locations with an established profile, perceived familiarity, and allure present unique challenges in... Read More
1:25 pm - 2:45 pm

Swiped Out II: More Implications of Dating App Use by Students Abroad and What to Do About it

As evidenced by our 2017 session, many program leaders, advisors, and site directors feel ill-informed about the ramifications of students’ use of dating apps while abroad and ill-equipped to address... Read More
1:30 pm - 2:45 pm

Leveraging Technology for Accessibility: Study Abroad for Deaf and Hard of Hearing Students

Universities and third-party providers consistently list making study abroad more inclusive and accessible as one of their top priorities. As a community, we are making great strides when it comes... Read More
1:30 pm - 2:45 pm

For faculty across the globe, new pedagogies are both exciting and intimidating. Instructional innovations such as live polling, flipped lectures, backward design, and peer learning are well-suited for globally-mobile and... Read More
1:30 pm - 2:45 pm

Immersion Technologies (AR/VR/MR) as a Translator: Developing Global Citizens for Education and Industry

This session explores the educational benefits of a transdisciplinary approach within student cohort and curriculum for study abroad. Through a partnership with faculty from the University of South Florida College... Read More
3:00 pm - 4:15 pm

This session offers an overview of the theoretical importance of establishing values for study abroad programs, as well as specific applications of the discernment process. You will learn how to... Read More
3:00 pm - 4:15 pm

Intentionally Global: An Avenue to Critique Global Citizenship Through Intentional Connections Between the Core Curriculum and Study Abroad

How can we foster a critical understanding of global citizenship through intentional and scaffolded courses in the core curriculum and study abroad offices? In this session we will offer an... Read More
3:00 pm - 4:15 pm

How are we, as study abroad professionals, preparing students to study in non-traditional locations with less-developed technological access? Join us and learn about the phenomenon of “technology culture shock” as... Read More
6:00 pm - 8:30 pm

What Is Different for Heritage Speakers Studying Abroad and Why Does It Matter?

This session focuses specifically on students raised in the U.S. with exposure to their family’s native language (“heritage speakers”) who study abroad in a country where that language is widely... Read More
8:45 am - 10:00 am

Research of student intercultural engagement has focused primarily on translingual and transcultural acquisition; far less attention has been paid to sojourners’ emotional experiences in unfamiliar lingual environments. This presentation will... Read More
8:45 am - 10:00 am

This session presents a strategy for integrating multiple disciplinary perspectives into the international studies curriculum. It follows the model introduced in Crossing Borders: International Studies for the 21st Century (Harry... Read More
10:00 am - 10:45 am

In this session, we’ll problematize processes and outcomes related to the experience of planning a study abroad program (Saldaña, 2012) to increase student consciousness about the impact of their travel... Read More
10:45 am - 12:00 pm

Internships in the Digital Age: Maximizing the Experience Through Online Learning

This session is for study abroad administrators seeking to add an academic component to their global internship programs, potentially through online or hybrid delivery. Global internships are a popular way... Read More
10:45 am - 12:00 pm

The pertinent and sensitive challenges of policing are concurrently global and local for many students, requiring study abroad leaders to consider student demographic and subjective position when choosing a study... Read More
2:15 pm - 3:30 pm

This session will focus on how our assessment of student experiences abroad has evolved from a narrative-driven, subjectively assessed reflective process to a hybrid that entails both subjective assessment and... Read More
2:15 pm - 3:30 pm

Study abroad provides an opportunity for self-exploration and intercultural awareness. Navigating a new environment and experiencing a new culture fosters a sense of globalization and a love for travel. Unfortunately,... Read More
3:45 pm - 5:00 pm

The question is not if an undergraduate student will encounter a challenge in an internship placement, but rather how they will lean into that adaptive trial where there are no... Read More
3:45 pm - 5:00 pm

Decentering the Academy in International Service-Learning: Toward Community-Community Engagement

In recent years, there has arisen a rich literature of ethical inquiries about service-learning as practiced in international contexts. A relatively underexplored area has been the practice of transnational service-learning:... Read More
3:45 pm - 5:00 pm

The emerging trend to internationalize the curriculum and produce “global citizens” has placed great emphasis on developing our students’ intercultural competence. In the field of study abroad, this often means... Read More
10:15 am - 11:30 am

How can professors help college students become co-producers of their own learning experience, to not only deepen understanding of course materials, but to hone critical thinking and sharpen skills employers... Read More
10:15 am - 11:30 am

Compassion in the Study Abroad Curriculum

This session focuses on the role of compassion in study abroad. First, we’ll offer a working definition of compassion that lends itself to the design and delivery of curriculum. Once... Read More
11:45 am - 1:00 pm

Rethinking Diversity in Education Abroad in a Data-Driven Age

In spite of institutional and governmental campaigns, the international education community struggles to achieve even representative participation in global programming. In this session, we will make the case that in... Read More
11:45 am - 1:00 pm

Preparing students to go abroad is a regular rite of passage for study abroad offices, but our content and delivery must align with the way today’s students consume information. In... Read More
11:45 am - 1:00 pm

Bridging the “African Diasporic Divide” in the Digital Age

Digital interfaces are challenging geopolitical boundaries. How can we leverage these digital resources to address “Diaspora Divide” and the ways in which Black people and the African Diaspora remain disconnected?... Read More

Known for his dynamic presentation style and no-nonsense approach, Obeng will introduce his collaborative digital learning tool – QUBE – and explain how educators and learning institutions can use it to instill organizational change, rapidly and effectively.

Obeng is a professor at the School of Entrepreneurship and Innovation at the Henley Business School. He is the founder of Pentacle The Virtual Business School, the first organization to focus on the integrated management approach of the complex 21st century. Obeng also wrote ten books on adapting to change, leadership, innovation and organization, including “All Change – The Project Leader’s Secret Handbook,” which was on the Financial Times’ bestseller list for several weeks.

Obeng earned degrees in biochemical and chemical engineering at Cranleigh School before becoming the youngest Executive Director of a European business school at Ashridge Management College. In 2011, the Association of Project Management presented Obeng the Sir Monty Finniston Award for lifetime achievement for his contributions to the practice of project management. Obeng also served as a board member of the UK Design Council and contributed to the development of the Double Diamond design thinking model.

Barcelona has undergone several urban transformations in the last few decades, and award-winning architect, Benedetta Tagliabue, has been an instrumental part. Attendees will get insight into her innovative approach to design, and the important role experimentation plays in creating spaces that are changing the landscape of Barcelona.

Tagliabue and her late husband, Enric Miralles, created Miralles Tagliabue EMBT, an internationally recognized architecture firm. Currently based in Barcelona and Shanghai, the firm focuses on public spaces and buildings for government, corporate, and private clients across Europe and China.

Among her most notable projects are the Scottish Parliament Building, Diagonal Mar Park, Santa Caterina Market, Torre Mare Nostrum, and University of Vigo’s campus. She also created the Spanish Pavilion at the 2010 Shanghai World Expo, which was awarded the prestigious Royal Institute of British Architects (RIBA) “Best International Building of 2011” award.

Tagliabue’s poetic, experimental architecture has won numerous international awards in design and public space, including the notable 2013 RIBA Jencks Award, given annually to an individual or practice that makes a major international contribution to the theory and practice of architecture. She has also won the 2015 RIBA Stirling Prize, 2006 National Spanish Prize, 2002 Catalan National Prize, 2005 and 2009 City of Barcelona Prize, and FAD prizes in 2000, 2003, and 2007.

Born in Milan, Tagliabue graduated from the Istituto Universitario di Architettura di Venezia (IUAV) in 1989. In 2004, she received an Honorary Doctor of Arts degree from Napier University. She’s currently a jury member for the Pritzker Prize. In addition, Tagliabue is the director of the Enric Miralles Foundation, devoted to promoting experimental architecture in honor of her late husband, Enric Miralles.