Our country is experiencing a moment of honest reckoning, one that has been a long time building. To understand the enormity of this moment, one needs only to turn to the American South for the living, breathing memory of the struggle for civil rights. In this video, we meet Sylvester, a man born and raised in the same town where Emmett Till was tortured and lynched. His story, his connection to the land and the people, and his recollection of that fateful event compels us to bear witness. We offer this piece as a chance to witness our uncovered history and as a plea to sustain our moment of reckoning into a movement that propels us forward, defined by progress. – André Robert Lee, Excerpts taken from The Nation. Published June 30, 2020

A discussion with the film maker to follow the screening of The Road to Justice. 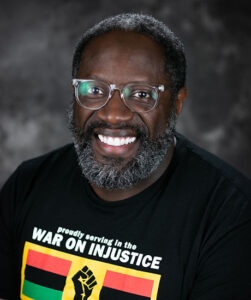 André’s experiences includes Many Things; New York City Public Schools, The Ford Foundation, Miramax Films, Urbanworld, Film Movement, Diana Ross, BET, Universal, HBO, Picturehouse, and Dreamworks. André directed and produced The Prep School Negro and took it on a worldwide tour over the past 11 years. André’s served as producer on the documentary I’m Not Racist…Am I?

André received a Fellowship in 2013 and was tasked with Directing and Producing the 12-month series Life Cycles of Inequity: A Colorlines Series on Black Men. André created The Election Effects Project for Paramount TV. André’s film Virtually Free is the story of incarcerated youth in Richmond, Virginia and has won best short documentary at a few film festivals. André’s next film is currently untitled and will document the Civil Rights Tours he has lead throughout the American South. He served as Executive Producer in this film. His Co-Directors worked closely with André to craft this story.

André has also been leading the cause for development of a feature film or series on the life and times of Bayard Rustin. André also teaches Filmmaking at the Germantown Friends School. He has worked with the school to develop a film program for Middle and Upper School. André has served as a Professor of writing at The Wharton School of University of Pennsylvania. André is also a Keynote Speaker and Consultant around issues related to Anti-Racism, Inclusion and Diversity for educational and corporate institutions.